So I discovered this when mooching at the facebook group ” Welcome to the Internet ” . Oh Robert, I knew you sparkled but I was always led to believe it was just in the day light, not from pure Christmas cheer.

Am I the only one who loves this too much? Wonder what Twilight fans will think of their beloved vampire sexpot Edward Cullen getting all XXX-masy on them?!

Ok, I was just socially searching my evening away when I saw this little link from R29. I was not expecting this. Erm…yeah. Me and ze house mate are sat, re-watching this and drinking wine trying to come to a conclusion about our thoughts..

SO what does everyone think!?

Oh no spaghetti-O’s! Just heard word that Miley Cyrus has lost her upcoming American Vogue December cover, due to the Vogue high empress herself, Anna Wintour, pulling the concept after “being unimpressed” with her VMA stunt with Robin Thicke last month.

Sadly, the pictures are reported to have been already taken, and were ready to be printed but as Wintour

They are now replacing her cover with another. What a shame as this would have been a much better step away from the “Disney Star” image she has been so desperate to separate herself from in recent months but hey, when the Wintour speaks, fashion listens.

Hell, there isn’t a person alive who wouldn’t swoon at her death stare! Still, here was me thinking all “publicity is good publicity” maybe so, but in this case, all publicity being a good thing may certainly be classed as unfashionable at present!

So what do you peeps think? Is Anna Wintour being too harsh, or has she made the right choice for the magazine?

Even sadder news, the word on the street is that Liam Hemsworth was so disappointed by the performance that it’s given him the final push to end the engagement. Numerous sources report that they are

They also claim that he has asked for his ring back, and

“just weeks away from calling it off permanently…..He is over her and wants to make a clean break,”

Auw man, I really hope this is not true and just obsessive Hollywood gossiping, I am sick of all the break ups! What can I say? I am a hopeless romantic and want everyone to be happy…le sigh, plus I am getting a bit annoyed at the stick young 20 year Miley is getting. It’s pretty strange that she is the one everyone is still talking about that night and all she did was, well, go a bit cray, cray in a flesh coloured PVC bikini during her performance, but as we know there were WORSE actions taken by people that night, and they are let off scott free…pfff, it’s like a case of shapeshifting morals and logic! We MUST GET OVER IT, WE WILL SEE WORSE ON OUR TV IN THE FUTURE ANYWAY! Goodness there was a time when I was younger that I thought Christina Aguilera was “Over sexual” …then Rhianna happened! Either way, I’m sending positive vibes for Miley, ignore ’em lovely! Trust me I have seen worse performances in my local clubs, so you’re hardly alone.

What are peoples thoughts? Does Miley deserve this run of bad luck and judgement, or should we all stop being so “pretend appalled” and move on to something else?… Bp Xx Jade Ewan, who thus far is most remembered by me for her Rita Ora spat rather than her stint the Sugababes, has confirmed in an interview to Digital Spy that the Sugababes

“This is a tricky one because I don’t feel comfortable lying, saying we’re in the studio recording and we’re going to bring music out next year, which seems to be the favoured line….I think it’s unfair to fans and we should be honest. The band being over is definitely not my choice. I kind of was unlucky in that I came in [to Sugababes] towards the end of the cycle when things naturally came to the end….There was so much drama surrounding the group, I think the music just got lost. I don’t like all the drama and the negativity. We kind of fizzled out about two years ago.”

She also discussed with the website her reasons for joining the group, which appear pretty understandable-

“I had to make a decision – a very difficult decision, because I was about making music and the creativity – when I realised that everybody was only interested in the business and that if I ever wanted to put out music I needed to take an opportunity in the short term….I was just trying to survive. I went from Eurovision to being told I had a solo deal to being told, ‘You might be dropped’. I’d already had three deals before that and been dropped and it’s heartbreaking. I basically thought, ‘Alright, I’m going to go for it, see where it takes me’.”

To be fair I am not shocked about the split and I think we kinda all suspected it for a while. The Sugababes 4.0 weren’t exactly groundbreaking, and my heart goes out to Jade, I really hope her future endeavors will do her proud, and that fans will support her. And of course getting one over on Rita Ora would cheer her up a bit I think! Pus Kudos to Jade of the Honesty! ❤

As we all know the original line up of the Sugababes featuring Mutya Buena, Keisha Buchanan and Siobhan Donaghy have reformed as MKS and have a new single out very soon. See the video below –

I also hope these girls also get the success they deserve. So what are peoples thoughts? And who was the best sugababes line up? I can’t lie, I always loved the originals!

I admit it, these are two celebs that I do have  a lot of affection for, I like the non conformists ❤ Though to be fair I am a still a bit angry at you Russell for being mean to Katy Perry…Naughty Russell, Naughty!

Lauren, who is currently staring in Big Brother, revealed details in a blog entitled “My affair With Russell Brand”. The daily star has also stated that Lauren has confirmed the story by sharing her quote “had sex with Russell” but other sources aren’t 100% on the actual truth of the matter, either way it’s the best showbiz story I have heard all week.

Read the full details on the blog itself!

Wow this is rather shocking but fans are not happy about the recent casting of Dakota Johnson and Charlie Hunnam as the lead characters in the film version of the bestselling novel “Fifty Shades Of Grey”. In retaliation they have set up a petition demanding a lead cast replacement with the actors Matt Bomer and Alexis Bledel! Yikes, thus far 30,022 supporters have signed!

Check out the Petition here

In my opinion, as it is such a HUGE franchise the casting directors can hardly please everybody can they? Hmm more news as it comes BBz.

Wow, this is great news if it is for real! Word on the street is that rock goddess Gwen Stefani, 43 is pregnant with her 3rd child with her husband Gavin Rossdale. 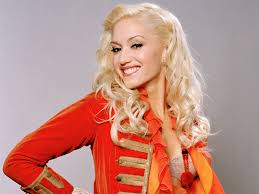 Why to go lovely lady! I hope this time around it is a girl, I would love to see how she dresses her baby girl up…(shallow I know!) and her two other children Kingston, 7, and Zuma, 5 always look uber cool AND happy, which is the most important aspect of having children anyway ( the happiness not the clothes!Children aren’t dolls celebs! Pfff) I’m excited for the family.

Congrats to Gwen and Gavin if it is true!

Bless Kim Kardashian, after Miley Cyrus’ performance at the VMA’s she must have felt slightly eclipsed of the showbiz spotlight of late, and so in retaliation she has dyed her hair blonde.

I am sure there is more to it, and quotes etc I could add, but I actually couldn’t give a hoot. What do you peeps think, do you likey?!

Vote below…and could someone fill me in on the Kim thang? I mean I get Kourtney and I get Khloe, they have personality! Other than her rather bootylicious body, what is so interesting about Kim? Seems a bit of a princess to me, but I may be wrong…hmmmm

Finally after several months of media frenzy and speculation, Dakota Johnson and Charlie Hunnam have been revealed on author E.L James’ Twitter feed, as the actors portraying the main characters ” Anastasia Steele” and “Christian Grey”  for the film version of her best selling ( for some reason, I presume it’s the copious amounts of tits and arse) book series “50 Shades Of Grey” .

Dakota Johnson is most famous for being the daughter of  Don Johnson and Melanie Griffith as well as featuring in the film “The social Network” and the Tv show “Ben & Kate”…Nope, I still don’t have a clue either..but yey! Either it’s her big break or her career ruiner..time will tell.

Charlie Hunnam is a bunny beloved Brit actor who made his debut as “Nathan” in “Queer As Folk” ( the original UK version) …and yes, doesn’t everyone remember that debut! * fans self* He also recently starred in “Sons Of Anarchy” and the film ” Pacific Rim”  directed by Guillermo del Toro. So he’s a bit more well known.

So this leads to the question, are you peeps who are fans happy? Let me know in our poll below or share your thoughts in the comment section…if you’re anything like me you will be fully uninterested in this showbiz event…as I haven’t even read the books! Am I missing anything? Like Really?

Rob Thicke may be getting a bit of stick about this pic ( hey I like a rhyme, what can I say?) taken at the VMA’s after party-

Look’s innocent enough right? Until you look in the mirrors reflection behind them…yikes, not looking too good, well if you’re looking at the picture from the view point of his wife of 16 years Paula Patton. Which she must have noticed as it was tweeted to her account with the words-

“@PaulaPattonXO look at the reflection girl,”

E uk have spoken to the lady featured in the picture Lana Scolaro and reports that the picture isn’t photoshopped. Rob and Paula are yet to comment, mainly as they are currently on holiday in Florida having “family time”. I am sure there have been a few silences over dinner over this one…